The Illusion of Endless Immortality 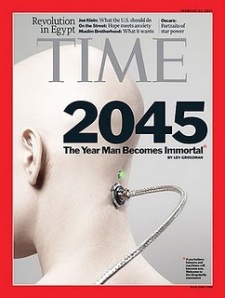 Have you spotted a tautology in the title? A pleonasm? A redundant juxtaposition of words? You’re so right – but how else can one get across to the tiresomely insistent and perennial hawkers of eternal life (a motley group that includes not only predictable ignoramuses but also scholars, scientists and self-styled sages) what immortality really means?

The gross conceptual blunder of applying the term “immortal” to what is unavoidably finite has most recently been perpetrated by Time (which, it is true, generates no great expectations of intellectual refinement). Its February 21, 2011 cover is dedicated to “2045: The Year Man Becomes Immortal”. Yes, that’s right: “immortal” as in “living forever”, or “existing eternally” – which is (Time’s editors please note) essentially, radically, fundamentally different from prolonging existence for a very, very long time. Forgive me for dispelling the pipe-dreams of those who yearn for the day (preferably before they die) that we’ll be able to extend human life indefinitely, but if one way or another it finally comes to an end, then – sorry, folks – it ain’t immortality. And come to an end it will.

Can it be so difficult to understand that immortality is an absolute, everything-or-nothing concept, like eternity or infinity? You can’t get close to it; it’s nonsensical and oxymoronic to think in terms of quasi-immortality, just like something can’t be almost eternal or on the verge of infinity. Even if a person managed to stretch his lifespan in some unimaginable form to a zillion years, if ultimately he dies, he will have been no more immortal than one of those gnats that reputedly live only for a single day.

Death, which is also an absolute condition (no one can be slightly dead), comes for us all; as Sir Thomas More says in Bolt’s A Man for All Seasons, “Yes, even for Kings he comes, to whom amidst all their Royalty and brute strength he will neither kneel nor make them any reverence nor pleasantly desire them to come forth, but roughly grasp them by the very breast and rattle them until they be stark dead!” Even for the most fervent futurologists, who fantasize about uploading their mind into one supercomputer after another (surely a nightmarish notion for most people), he will come, and corner them in whatever faltering software their tenuous consciousness may linger. Lewis Thomas[i], from his sober scientific perspective, reaches the same inescapable conclusion in his essay “The Long Habit”:  “If we ever do achieve freedom from most of today’s diseases, or even complete freedom from disease, we will perhaps terminate by drying out and blowing away on a light breeze, but we will still die.” And, as usual, no one grasps the crux of the matter quite like Shakespeare: “Death, a necessary end, / Will come when it will come.”[ii] And when it does come, better to give in gracefully and with dignity than cling on to a phantasmagorical existence, cowering in some temporary, prosthetic refuge.

To a certain Aubrey de Grey, quoted with awe (possibly because of his impressive name) in the above-mentioned Time article, it is nonetheless obvious that death can be forever held at arm’s length: “People have begun to realize that the view of aging being something immutable – rather like the heat death of the universe – is something ridiculous. It’s just childish.” But wait a minute: isn’t this tantamount to saying that although the universe itself is doomed, human ingenuity will find a way of outliving it, in some organic – or, at any rate, physical – form? One can admire the dogged optimism that inspires such an absurd outlook, but not the fallacious thought processes in which it is grounded. The end of everything will extinguish even mankind’s futile search for physical immortality.

Metaphysical survival is an entirely separate issue, but one – alas – concerning which we have little empirically verifiable data. (In any case, most stalwart proponents of immortality in the literal sense scornfully reject the concept of soul as a primitive superstition, or at best – ironically – as wishful thinking. Perhaps this is what motivates them to search so urgently for ways of outfoxing the Grim Reaper.) Needless to say, I have nothing to add to millennia of speculation about the undiscovered country from whose bourn no traveller returns. One can always hope that all manner of thing shall be well. In the meantime, there is nothing to prevent us from making the best, in every sense, of what life we have. An elegant variation of the clichéd carpe diem is dum vivimus, vivamus – while we live, let us live. “Thus, though we cannot make our sun / Stand still, yet we will make him run”.[iii]

[i] Medical researcher, successively Dean of the New York University’s School of Medicine, Dean of Yale Medical School and President of the Memorial Sloan-Kettering Cancer Center

Muy bien pensado y escrito. The law of the exclusion of third in philosophy; two choices only but not a third one. Only energy is undestructible but it suffer transformaitons, same as us, and that is a natural law we cannot break.