The Genius of Hergé

This is probably the pinnacle of the Franco-Belgian school of comic strips, which is tantamount to saying that nothing better has ever been produced in comic strip form.  Beneath the suave, classical serenity and balance of the visual presentation, symbolized by Captain Haddock’s elegant, XVIII Century Château de Moulinsart, there is a current of sunny but subversive humour, as genial as P. G. Wodehouse’s yet as mordant as Saki’s. Les bijoux de la Castafiore is puzzling to children and an anomaly among Tintin’s adventures, since it’s not an adventure at all: nothing really happens. It is a masterpiece of warm, ever-so-gentle irony that illustrates the futility of all human effort and endeavours. We cannot truly achieve anything, Hergé is telling us, so let us accept that life is impossibly confusing, messy and intractable, and that we are doomed to fail; but let us fail with kindness, decency and humanity.

Les bijoux de la Castafiore is visually and textually rich and polished, and should be savoured frame by frame, much in the same manner as one might make one’s way, sip by sip, through a bottle of the finest, most mellow Margaux. Unlike the latter, however, Les bijoux contains delightfully incongruous and provocative surprises, rather like tasting some cod liver oil or McDonald’s milkshake in your Margaux. What is one to think when Bianca Castafiore (i.e. “White Chasteflower”), the exuberant Milanese opera singer, thrusts a rose under the nose of Captain Haddock, a confirmed and misogynistic bachelor, whereupon a wasp concealed within the flower stings Haddock’s nose, and the latter promptly swells to colossal proportions? I have lost count of the number of psychoanalytical studies that Les bijoux de la Castafiore has generated. 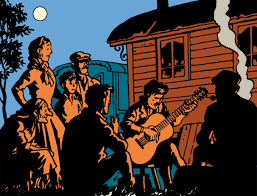 I would agree with the sentiment. However, a deeper analysis of the various vignettes within Les bijoux de la Castafiore would make this a very pleasurable read worthy of posterity. I do hope there is a follow up that delves in deeper to this masterpiece from Herge